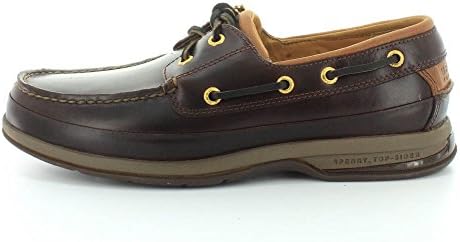 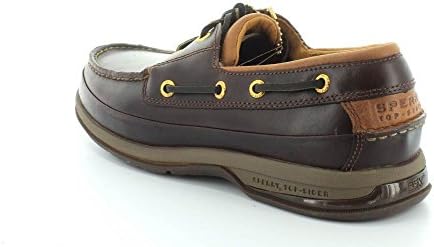 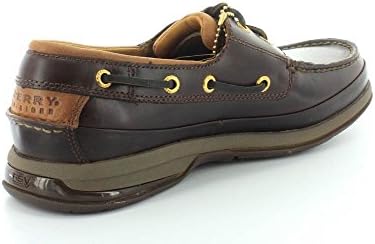 Best known for boat shoes that have logged more miles of open ocean than any other brand, the Sperry Top-Sider story began on a raw winter day in New England. When avid sailor and hobbyist inventor Paul Sperry let his dog Prince out for his daily exercise, he noticed that the cocker spaniel was remarkably stable, even at a full run on the snow covered, icy crust. Paul raced back to his laboratory to begin working. Using pieces of rubber, a razor blade, and an ordinary sneaker, Paul had soon pieced together the prototype of the world’s first boat shoe. Subsequent designs yielded the original Sperry Top-Sider now known as the Authentic Original. Since 1935, Sperry Top-Sider has been the leading brand of footwear for those who love the water. From its introduction of the world’s first siped rubber outsole for non-marking traction, to its advanced technical fabrication to combat the elements, Sperry Top-Sider remains the vanguard of high-performance amphibious footwear. Available around the globe in fine independent, marine, and department stores, Sperry Top-Sider is the official footwear of the U.S. Sailing Team, Zodiac Academy, the World Billfish Series, and the Shimano Fishing Tour.
Is Discontinued By Manufacturer ‏ : ‎ No
Product Dimensions ‏ : ‎ 1 x 1 x 1 inches; 14.08 Ounces
Item model number ‏ : ‎ 0579052
Department ‏ : ‎ Mens
Date First Available ‏ : ‎ January 24, 2012
Manufacturer ‏ : ‎ Sperry
ASIN ‏ : ‎ B0056XJ6T2

We use cookies on our website to give you the most relevant experience by remembering your preferences and repeat visits. By clicking “Accept All”, you consent to the use of ALL the cookies. However, you may visit "Cookie Settings" to provide a controlled consent.
Cookie SettingsAccept All
Manage consent

This website uses cookies to improve your experience while you navigate through the website. Out of these, the cookies that are categorized as necessary are stored on your browser as they are essential for the working of basic functionalities of the website. We also use third-party cookies that help us analyze and understand how you use this website. These cookies will be stored in your browser only with your consent. You also have the option to opt-out of these cookies. But opting out of some of these cookies may affect your browsing experience.
Necessary Always Enabled
Necessary cookies are absolutely essential for the website to function properly. These cookies ensure basic functionalities and security features of the website, anonymously.
Functional
Functional cookies help to perform certain functionalities like sharing the content of the website on social media platforms, collect feedbacks, and other third-party features.
Performance
Performance cookies are used to understand and analyze the key performance indexes of the website which helps in delivering a better user experience for the visitors.
Analytics
Analytical cookies are used to understand how visitors interact with the website. These cookies help provide information on metrics the number of visitors, bounce rate, traffic source, etc.
Advertisement
Advertisement cookies are used to provide visitors with relevant ads and marketing campaigns. These cookies track visitors across websites and collect information to provide customized ads.
Others
Other uncategorized cookies are those that are being analyzed and have not been classified into a category as yet.
SAVE & ACCEPT
Loading...